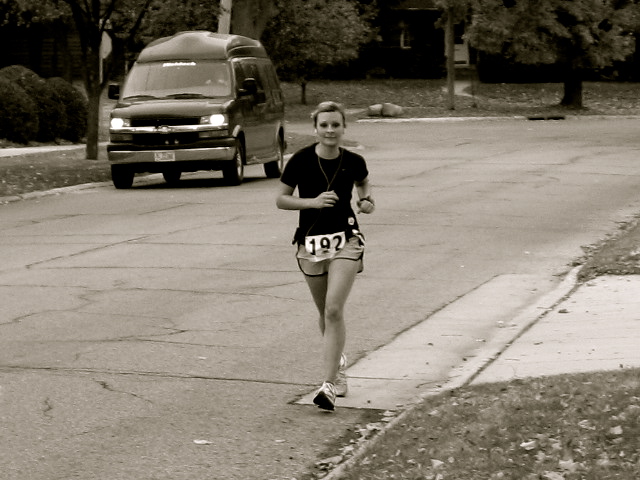 The thing with running races and accomplishing new goals and paces is that it becomes addicting. I got home from the Twin Cities Marathon happy with my time, but disappointed with how the race actually went. I was feeling very motivated to run a race again…and soon. I got home Sunday afternoon and spent the next two days thinking about doing another race in less than three weeks.

On Tuesday I mailed my race registration for the On the Road for Education Marathon. I was looking to cross another state off that was not too far away and that would be low key. This race sounded like the one. Ryan and I left on Saturday stopping at a state park in Iowa on the way to enjoy the last of the fall colors and do some walking on the trails. It was a small park, but a nice way to spend a couple of hours. We did a little fall photo shoot, too. I am obsessed with taking pictures afterall.

From the park we headed to Mason City, Iowa. We stopped at Newman High School to pick up my race packet. Talk about low key and fast packet pick up. It was awesome to avoid the crowds and get in and out. I was not expecting much swag for a small race, but was impressed by the super comfy, Fox River socks, yogurt covered cranberries, and several other goodies in the bag. We checked into our hotel, headed to Applebee’s for a prerace dinner and then to bed for an early night. 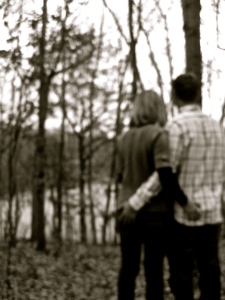 Race morning came and I was not feeling super excited. I knew there wouldn’t be crowd support and really didn’t know what to expect for the course as there were not a ton of details. One nice thing was getting to sleep in since Ryan was able to drop me off two blocks from the start of the race near Music Man Square. My goal was to run under four hours, but keep the pace comfortable until the last few miles. When I got to the last few miles the plan was to go with what pace felt good. If I felt good, then I would pick up the pace. If I was struggling, then I would keep maintaining my pace as best I could. I had never ran two marathons within a year of each other, much less three weeks apart. I wanted to have a positive race experience after feeling rough in the Twin Cities.

To sum up the race, all I can say is WOW! I loved this course. It was exactly what I was hoping for and more. The first few miles were in town on city streets. The next few miles took runners on paved trails and then gravel roads. The miles on the gravel roads were not my favorite and made my hips begin to hurt early on. I was a little nervous at this point as it was early in the race. The next part of the race was very scenic. The views and paved path helped take away any feelings of discomfort I was having. My favorite part of the course was next, the out and back miles on a dirt packed trail along the Winnebago River. The softer surface was amazing on the legs and made me feel springy with each step. 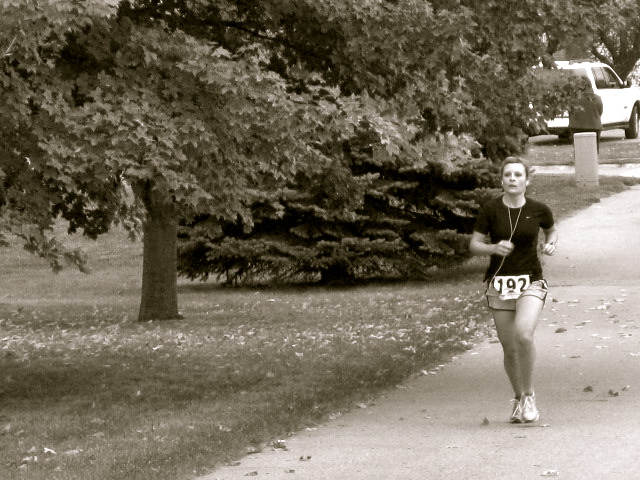 Running down a PR.

While running in the wooded, scenic, and rejuvenating trails, I looked down at my Garmin to realize I was running the same pace as my PR a couple of weeks ago. Would today be a special day? There were less than 10 miles left, but a little too soon to get excited. After coming out of the trails we ran the majority of the race on pavement, with a small gravel stretch. With two miles left in the race I was still on pace and realized I might be able to PR, not by much, but still a PR, if I could maintain and pick it up the last mile. Somehow I did just that. I crossed the finish line in 3:47:41. I beat my previous PR by just over minute. I was definitely not expecting that. I attribute it to the course, change in surfaces, and the extremely flat elevation of the race.

I would highly recommend this race to others. I loved the scenery and variation of surfaces. I have yet to run a race with the same variety. I was also first in my age group and 6th overall for women. I had never won my age group in a race. Despite being a smaller race, I was still proud.

Three morning miles today along with the @letsrise.co podcast. I call this my running therapy. Today what resonated with me was this: “Make peace with the unknown. Make peace with the fact that you do not know what the future is going to bring. The only way to make peace with an unknown future, which is the only kind of future that has ever been in front of you, is to do some work.” -Rachel Hollis • Yes, life is different. This will be for a while. But the future has always been unknown. We can’t let that become our excuse. Think about all the unknowns that have occurred in your life in the last year outside of a pandemic. The future has always been unknown. So now what can we do about that!? Definitely recommend this episode! • Episode 146-How to cast a vision for the rest of your 2020 #runner #run #runningtherapy #wisconsinrunner #latergram #risepodcast #truths #morningmiles #rachelhollis
Over a month ago now my family and I spent the day hiking land that belongs to my husband’s family. This doesn’t seem special or extraordinary, but it is an example of something I’ve noticed over the past couple of months. We’ve been doing things we never got to do before. Somehow despite knowing my husband for 18 years and liking to hike, I had never hiked the land with my husband (where picture is from). • I’ve been working hard to not dwell on things we can’t do, but last week I fell hard into the would have beens dialogue. What this summer would have been for us. So many memories we wouldn’t be making. Then this weekend it hit me...that is ridiculous! • I’ve been noticing small things for at least a month that I never noticed before. The crazy amount of flowers that bloom along a trail or road in spring. A bluff across the river that I never paid attention to. The color of birds. The many adorable facial expressions my daughter makes. The way the light rises during a spring day. The transformation of spring growing into summer. Then I thought of something. • What if I noticed all the things we would get to do this summer that we wouldn’t have been able to do because we were going to this festival or because we had tball practice or a softball game or swimming lessons? What could we do since we wouldn’t be going to to the splash pad or this or that? And the answer is anything we can come up with. • So this past weekend we rewrote our summer plans. We dreamed and brainstormed. We planned and unplanned. We thought of ideas we would have never considered ordinarily. The first draft after all is rarely the best. Maybe this summer will be even better than we could have originally thought. Maybe the memories will be that much more special because we didn’t settle for the first draft. • How will you rewrite your summer? #summervibes #summerplanning #hikingadventures #wisconsinhikes #notsettlingforthefirstdraft #itiswhatwemakeit #summerplans #explore #familyadventures
We brought the brother along today. 🏖 ☀️ #kickingoffsummer #beachlife #thankfulforthesacrificeofothers #memorialday #summervibes
Ran just under six miles late this morning. My first taste of warm and humid on the run this summer. A struggle bus of a run that somehow felt harder than my Ragnar last weekend or more than double the distance two weeks before. But a hopeful and encouraging run nevertheless. • Despite the excessive sweating, thighs rubbing and the miles just feeling hard, there were tons of purple flowers lining the trail in so many spots, people with smiles on their faces, new to me sections of trail and all the colors of the rainbow of birds flying along with me. I swear the same two cardinals have been following me on this trail for the past month. • The last time I ran part of this section of trail, living where we do now was just a hope without an action plan. Today it sank in that it is our reality. Yeah! Had we not jumped a year ago and went for it, I’m not sure it would have happened this year or next with all that’s taken place since. Today’s run is a great reminder to not hold back and go for those things we want because a year from now everything can be different. I’ve had so many reminders of this in 2020. • Today’s run was yet another reminder that the struggle and sweat and hard can take you where you’ve never been before. It can also take you back in a good way. Today despite being out of shape, I felt like a runner again for the first time in a while. #runner #run #wisconsinrunner #lacrosserivertrail #strugglebus #toughrun #goforit