I knew I really wanted to run a half a marathon before the pelvic pressure or discomforts of running became too much this pregnancy.  16 weeks pregnant seemed like a great time to complete a half marathon.  Not exhausted in the first trimester and not uncomfortable yet.  I also needed an excuse to wear the PRO Compression Jailbird socks I’ve been in love with forever and haven’t worn.

Since I’ve been through this once before (pregnancy), it seems I’m having significantly less ligament pain and pressure on my pelvis than my first pregnancy.  I’m so grateful for this and plan to take full advantage of this.

Admittedly, my preparation for this race was not what it should have been.  In fact I didn’t sign up until the night before since I had been sick with a nasty cold and pink eye for the past week and a half.  The first trimester was not full of activity for me as I felt so tired and sick and struggled with time management, too.  I hadn’t run a run over 6 miles in 6 weeks, but felt like my experience running 20 half marathons, 14 full marathons and one ultra marathon would help me through.

I had run a steady buildup of long runs until March running 13 miles at 7 weeks pregnant. I did what you should do for any pregnant run during my race-listened to my body.  I went much slower than my usual non-pregnant paces.  I drank lots of fluids.  I mapped out the restrooms before committing to the race.  Bathrooms every two miles was a deal sealer for me.  I could hydrate and relieve away!  I said I had to be ok with needed walk breaks. Amazingly I only walked about a mile total during the half marathon.

For me running this half marathon was something I needed to do for myself while also taking care of the baby inside me.  I knew going in it would likely be my last half marathon for the next year.  Having a baby in October in Wisconsin means you won’t see much for races until April or May.  That would also put me at six months postpartum, which is just a few weeks later than when I ran my first half after having Pierce.  Six months feels appropriate given you train or up mileage prior to the race and your need to heal and work that pelvic floor.

One of the hardest things about becoming a mom had been letting go of running.  I needed to do one more race before having another baby, but I also wanted it to set the tone for the rest of my pregnancy.  Last time winter and being trapped inside for workouts combined with so much pelvic discomfort meant much less activity than I had planned for during my pregnancy.

This time I have spring, summer and early fall weather to help keep me going.  I’m really hoping to have a very active pregnancy.  Last time I was active, but not as much as I’d hoped.   I feel the activity I did do helped me feel amazing post-delivery and helped me get back to activity much quicker.

Back to the race recap!

Miles 1 and 2 are run down Grandad’s Bluff.  I personally don’t like downhill running a ton, so this wasn’t my favorite, but the views were great!  These miles tick by fast!  I of course drank a bottle of water with a Strawberry Lemonade Nuun on the bus ride (the best), and we waited forever to get off the bus so I only peed once before the race.  We got off the bus at 8:00 which is when the race was supposed to start.  It actually started at 8:10.  As a result I made an early bathroom stop at mile 2, drank some water and was on my way.

Mile 3 I struggled to set into a rhythm.  Around mile 4 things clicked.  My body felt warm and the rolling hills were almost over.  Miles 5 and 6 I felt strong.  I had a GU and water at mile 4.  I could feel it giving me some extra energy.  During these miles you run on a paved bike path with lots of blooming trees nearby.

By mile 6 I had to pee again, but kind of forgot.  I don’t know how this happened but it did.  Mile 7 felt good, but by mile 8 I was thinking of a bathroom every step.  I stared ahead in hopes of seeing that beautiful blue port o potty!!  Otherwise I felt strong.  I had another GU and water and Gatorade at mile 8 where I found a place to potty.  I realized I was really sweating even though I felt great, so I decided here on out I would drink both water and Gatorade at every water stop.

Miles 7-9 are my least favorite as they take you around a residential area in La Crosse. Residential areas are not all that motivating to me, but it was very flat.

At the end of mile 8 my legs began to feel tired for the first time.  I walked for a half mile and then felt good again.  The rest of mile 9 and 10 felt pretty good.

Mile 10 gets a bit more scenic as you run on a bike trail again.  At Mile 11 I took a GU, drank some fluids and used the bathroom for what I hoped would be the final time.  I struggled with this mile, but felt ok.

Mile 12 and 13 I felt good for what I was doing, but I could feel hunger and fatigue coming.  I was glad to only have two miles to go.  At least these miles are scenic as you run along the river and downtown.

Pregnant running can take all the energy right out of your legs in a way that I’ve never really experienced when running otherwise.  Luckily it only happened a few times, I’d walk a bit and then feel good.

The quiet time to myself also gave me time to daydream about baby and life.  Are you a boy or a girl?  Just how crazy will life be with two kids 18 months and under?  How great will the joy be to give Pierce a sibling?  Will I still like my husband in a year?  More importantly, will he still like me?

As I crossed the finish line I was relieved to be done and wanted a snack stat!  I ate a banana and a small cookie from the tent and then we enjoyed some time at Riverside Park. Then we headed to Fayze’s for brunch and walked around downtown while we waited for our turn to eat.  I highly recommend Fayze’s for brunch, but be prepared to wait if something is going on downtown. 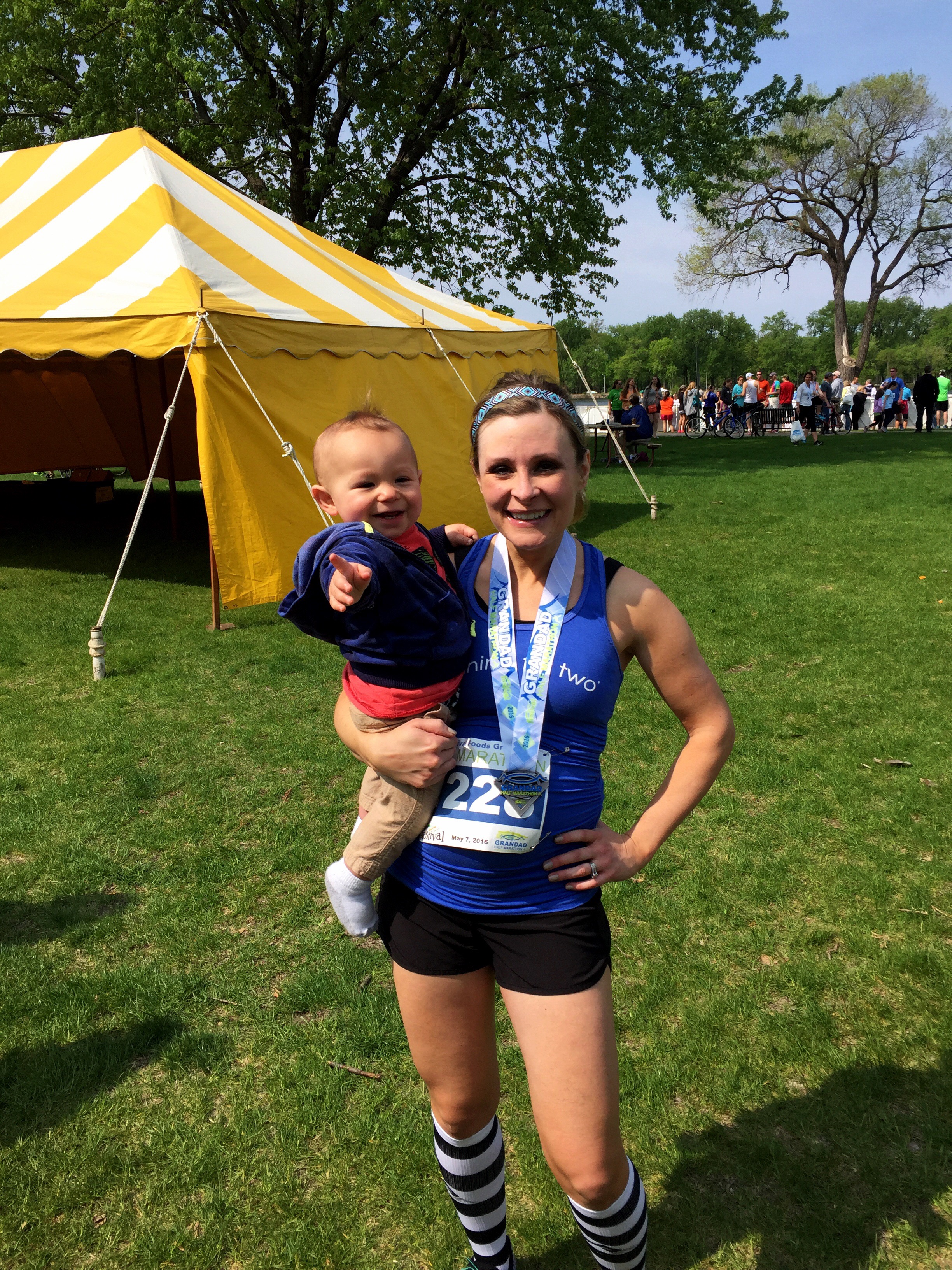 On our walk we stopped at Addie Cakes for some cupcakes to enjoy later in the day.  It was the perfect way to celebrate a half marathon finish!

Oh, and getting a caramel macchiato later at Starbucks really helped too.  Dressing like your favorite drink is optional.

If you were looking for more race photos of the course, then you’ll have to check out my Grandad’s Half Marathon post from 2013.  The course has not changed since I ran it three years ago. I felt I had enough juggling to do with my music, staying hydrated and fed and listening to my body, so I didn’t take any photos during this year’s race.

Overall I really enjoy this course and it does have many scenic parts.  I still debate whether it is a PR course or not.  Prior to the change in course I did run a former PR.  The downhill is hard on the quads unless you are prepared and might hurt you later in the race more than the time savings at mile 1 and 2.  Definitely check it out for yourself.    La Crosse is such a fun town with so much to do as a couple and/or a family.

Lastly, this running for two tank is amazing.  It is so soft and comfortable AND it doesn’t move, ride up or do anything annoying.  Runner tested by me for 13.1 miles!  I’ve also worn in on several other occasions with the same experience.  A tad pricey, but it comes in a bunch of other colors and styles (yoga, barre, sweating, etc. for two). Check out For Two Fitness to see what they offer!!  I ordered mine in my usual size and it has room to grow, too.  (Just my opinions here, not compensated I any way to write this.)

Family, good food, running and relaxing sounds like a perfect day to me!