Since I won’t be running for the next few days due to my sprained ankle in a race this past weekend, it might be the right time to talk about injuries caused by running. I’ve been so lucky to have never suffered from a running injury over the past 16 years of running. Although my injury was caused by a tree root and not overuse or overtraining, most runners will experience an injury of some sort in their running career.

Overuse or training too much too soon can all lead to injuries. The infographic below helps explain the basics, prevention, and treatment should you ever get the dreaded running injury.

Warning! This race report does not have a happy ending.

On Saturday Ryan and I were set to run the Dances With Dirt Half Marathon. The race took place in Baraboo and began at 7:00 a.m., which meant an early wake up call for us. Early as in 4:20 a.m. after going to bed at midnight. I was less than excited to run after so little sleep, but I knew once we got going it would be great. 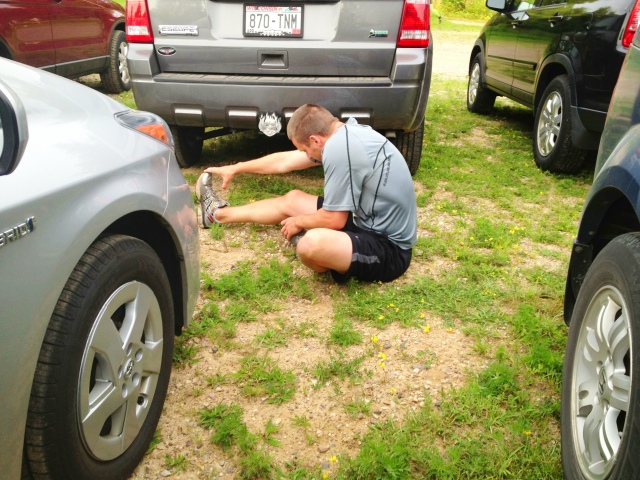 This would be our first real trail race. The race was extreme, meaning single track trail and roots and rocks. The first 2.5 miles were up hill all the way. I was excited for this challenging race.

Our course route was in blue. 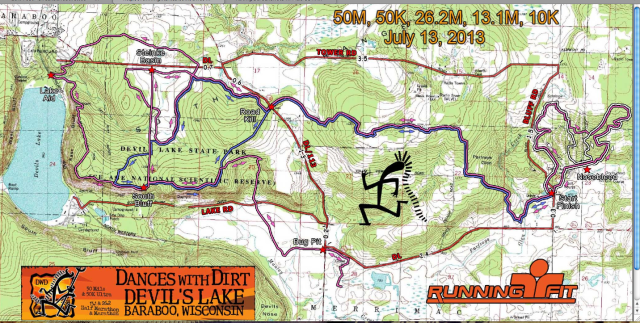 The horn went off and we were off. The first mile started off as expected. It went up. The path was narrow, your eyes needed to be constantly on the ground to watch out for roots, rocks, and curves. It was also pretty crowded. Passing was very difficult and at times impossible. As we neared mile two a couple people said on your left meaning they were passing. I took my eyes off the trail to move over for a split second and just as mile two alerted me on my RunKeeper app, my left foot and a root had an altercation. I knew I had sprained my ankle the moment it happened. It was a familiar feeling from a Friday night stepping off a curb in college. Lets not relive that night.

If this were a road race I could have pulled off the course and Ryan could have easily kept going. This course was different. We didn’t know exactly where the first water stop was. We thought it was likely one or two miles ahead. This means I had to walk on a single track trail with roots, rocks, and a sprained ankle for over a mile with people trying to get around us constantly. Making it worse were the gazillion mosquitoes biting as we walked the trail.

We came upon an aid station that a local had set up. By then my ankle was bulging over my shoe. It felt just awesome! The local told us the first official aid stop was still two miles ahead and there was likely no one there. We asked where the nearest road was so we could walk to it. I would then wait for Ryan to get the car and come to pick me up. She then said that if we walked a half mile or so down another trail she had her car parked nearby and would take us back to the start. I said sure and we began our walk to her car. She was my guardian angel that day!

It was at this time that Ryan asked if he could finish the race, but I did not hear him. Since I didn’t hear him say this he took the silence as a no. We got our ride back to the start, and Ryan turned our race bibs in so the organizers knew we weren’t lost in the woods some where. We were back on the road after running only two miles and walking nearly two miles; not the 13.1 miles we thought we were coming for. It was my first DNF (did not finish) of my life. I’ve never not finished a race. Not in middle school, high school, or beyond.

Later on the car ride home I felt terrible that I didn’t hear him. He took my no response as a no-way-in-hell are you going to finish the race. In reality I really would have liked him to finish, but I was pretty focused on getting off my foot. I said next year we’d have to be back so we could both finish. It was exciting to see Ryan’s disappointment in not getting to finish because I would feel the same way. I love that we both hate quitting things we start and not getting to finish things we worked hard for. I also think it means he likes running these things more than he lets on. He really was disappointed.

Once we got home it was RICE time for a bit. I’m hoping this sprained ankle heals quickly. My only thoughts in the woods were how I wanted to get off my ankle and get some ice on it. Once headed home I began to think a million thoughts. How would this injury impact my PR marathon training? Will I be able to PR? How long will I have to rest from running while my ankle heals? What will I do to stay in shape while it heals? Taking off a week doesn’t affect fitness, but more than that does! What will I do? What if I can’t run in Utah in less than two months? I immediately crossed this question out of my mind. I will run Utah even if it is slower than I want and not a PR attempt as planned. Two months is plenty of time to be back on the road. 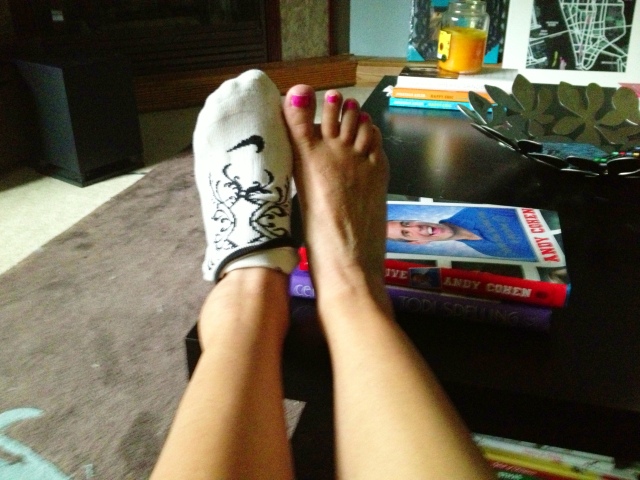 Having never been injured I do feel lost. It is so weird to not be running-to have taken the past three mornings off and not be lacing up my shoes. I was feeling a lack in motivation about training during the summer, but was still getting in my runs. I’m going to look at this positively. Maybe the time off will have me rejuvenated and recommitted to my race goal. I think the mini-break will give me a fresh mind set and make me reappreciate my love of running. I will have to ease back into training and then really work hard during the few weeks before the taper. August’s Runner’s World has an article about Killer Weeks and the improvement runners can make by bringing two weeks of pain to their training plans and see significant gains in their training. I guess Killer Weeks are in my future. I can and I will.

Until then I’ve been catching up on episodes of Mad Men on Netflix. It is a great coping strategy!

Be here now. -Ram Dass* • *Photo Credit-photo from Palm + Pine Yoga, not mine. • Today at yoga our instructor brought up how yoga is so much more than moving your body. It can transcend everything you do. I’ve fallen in love with yoga at Palm + Pine and feel that transcending happening. • I am also loving their new mural (artist pictured) for its reminder to be present (again, not my photo) Most of the time my eyes are shut when I’m coming up to a new pose or I’m totally focused, but I love this reminder in case my mind wanders both in class and in life. I’m always working at being here now. As a goal orientated, planner always looking ahead, I need this reminder often. • Be here now. • Visions and goals are important to me, but so is being here now. I’m getting better at this one pose and breath at a time. 🧘‍♀️ ☯️ ♊️ ✌️ #growthmindset #growthroughwhatyougothrough #yoga #transcend #beherenow #ramdass #yogi
The best dinners involve catching up and when finally looking at your phone saying “whoa, it’s that late already”. Thanks friend @kenjobrown for the suggestion. These tacos were amazing! 🌮 🍷 #girltalk #spicychickentacos #javavino #yum #girlsnight #norabbitholesinsight
Winter weather and my first thought is...a hike would be pretty! Windy and cold hike to kick off my #52hikechallenge in 2020. ❄️ 🥾 #2020goals #intentionalliving #hikingadventures #hikewisconsin #millerbluff #winterhikes
Another run on the mill this afternoon, but my mind was on this view from a run last week. 🏃‍♀️ #treadmillmiles #motherrunner #running #run #wisconsinrunner #winterruns #trailmiles